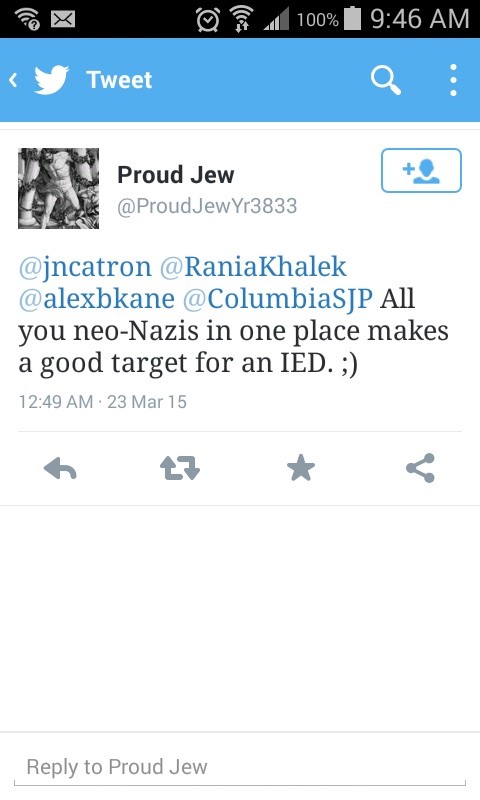 As part of Columbia Students for Justice in Palestine’s (CSJP) annual tradition of holding a series of events in recognition of Israeli Apartheid Week, an international initiative to raise awareness about the discriminatory policies of the state of Israel, a panel discussion titled Media, Solidarity and Palestine was held on Tuesday, March 24th on Columbia University’s campus. The panel featured known journalists, including Rania Khalek, Alex Kane, Joe Catron, and Hanine Hassan, and was moderated by notable Columbia professor, Dr. Hamid Dabashi. On the evening of the day preceding the event, one of CSJP’s invitees, Rania Khalek, issued a tweet advertising the event, in which she tagged Columbia SJP and her fellow panelists’ official twitter accounts. In a series of threatening responses, a twitter user—operating under the username @ProudJewYr3833—tagged Rania Khalek, Alex Kane, Joe Catron, and CSJP, stating: “all you neo-nazis in one place makes a good target for an IED. ;).” @ProudJewYr3833’s account is no longer active.

On the morning of March 24th, members of Columbia Students for Justice in Palestine met with the Office of Multicultural Affairs at Columbia University, as well as their club advisor from the Office of Student Engagement, to discuss responses to the bomb threat. We were assured that one Public Safety officer would be present. Fortunately, the event went as planned and no students or attendees were faced with any threat to their physical safety.

Despite a fortunate turn of events, CSJP would like to note that such a threat is not isolated in its reflection of a larger and more extensive cultivated culture of intimidation faced by students advocating the Palestinian cause, on Columbia’s campus and beyond. On the issue of the bomb threat, Jannine Salman, an active CSJP member states: ”The tweet is not an isolated incident, nor an exception. This is yet but one example of the reception of pro-Palestinian activism. The attacks—personal, political, physical, emotional, verbal, and otherwise—are constant to SJP and our allied student groups.”

Exactly a year ago, during Israeli Apartheid Week, the Barnard administration took down CSJP’s administration-approved, hand-painted banner after on and off-campus groups claimed the banner, which stated “Stand for Justice, Stand for Palestine” was threatening. In their official statement, Lionpac (now called Aryeh)—the pro-Israel student group on campus that initiated the demands that resulted in the removal of said banner—stated: “The banner was not taken down in order to suppress a particular political viewpoint, but rather to ensure that people feel comfortable walking into Barnard Campus.” This banner, the alleged source of discomfort for Zionist students and administrators on campus, was threatening enough to warrant removal, public statements from administration, and national media coverage—despite having been approved through the necessary administrative channels.

It is disappointing and alarming to CSJP, then, that a bomb threat to an administration-approved event not warrant anything more than the presence of a lone security guard. “When students engage in expression supporting Palestinian human rights, they’re unfairly labeled anti-Semitic, censored and punished by their administrations,” said Radhika Sainath, cooperating counsel with the Center for Constitutional Rights and staff attorney at Palestine Solidarity Legal Support, which tracks incidents of repression of Palestinian rights activism. “Here we have an actual public threat to bomb an SJP event, and there has been little condemnation.”

CSJP strongly condemns such double standards, which cannot and should not prevail on any campus.